Hi, my name is Rita Leistner. I’m an artist who uses photography and film to document communities
in extreme conditions: soldiers in Iraq and Afghanistan, female patients in psychiatric hospitals in Iraq and Lebanon, First Nations communities in the Arctic, women wrestlers in the United States, and loggers in Canada. I explore themes of purpose, struggle, and belonging.
Each unique world is my workspace. I spend months at a time “embedding” with my subjects, living among them in the peculiar position of being both a part of and apart from, insider and outsider at the same time. I think this reflects a part of the human condition we can all relate to plus it gives me a reason to hang out with and get to know people. It also means exposing one’s own vulnerability and building trust.

If the location is remote or rugged, especially off the grid, it means an enormous amount of logistics. Years of working in the film industry, tree planting industry, and war zones, have equipped me with the skills to work pretty much anywhere with a lot of gear, on my own. From 2016-2019, I was photographing and filming professional tree planters in the forests of British Columbia—the results of which I am showing at Art Toronto 2019. Tree planters live off the grid and work in conditions that make photography and lighting enormously challenging. I have my own generator to charge my more than thirty batteries every night and keep my computer running. I lived and worked out of a tent until I bought a camper trailer, which made things a lot easier. This kind of photography is also extremely physically demanding. Staying focused and creative and keeping track of all my cameras and technology while pushing my body to its limits and never getting enough sleep requires me to be insanely organized and prepared. When I started work on The Tree Planters, I was about to turn 50. By the time I was finished shooting, I was 55. There was an urgency to doing this project now because I knew that at some point I wouldn’t be able to do it physically, even if I had the creative and technical ability. I like to stress this aspect of this kind of photography, because a lot of people don't think about that. I also spent ten seasons from 1984-93 as a planter myself, planting over 500,000 trees. What was once my workplace and community became my art workspace all these years later.  I returned as an outsider to live with tree planters probably less than half my age. At first I wasn’t sure I had it in me to survive the grueling conditions. Now that the work is done and the pictures are on the wall, I feel a great sense of accomplishment.

I shoot digitally, on a medium format camera while also making a film about the tree planters. My amount of post-production is mind-boggling. The other side of my workspace is my computer where, after months of shooting, I spend an equal number of months reviewing, editing, researching, writing, burning and dodging, looking at the photographs and discussing them with my closest creative confidants: my printer Bob Carnie, my gallerist Stephen Bulger, with Dewi Lewis, who will be publishing the book The Tree Planters (due late fall 2020!) and with filmmaker Don McKellar, who is writing the Foreword to the book. The post-production process is radically different than the work in the field and easier to imagine, because it looks pretty much like anyone’s home office! Right now, I’m working on my book, on the work for Art Toronto, and on my experimental documentary film. My film editor Darby MacInnis comes to my work-live studio six days a week. Everything overlaps. I work 12 hours a day, but that is less than in the field, when we work 16-18 hours a day. I call Toronto home, but right now I’m working out of a live-work studio in Manhattan because Darby fell in love with someone who lives here and cutting the film in New York was the condition of him working on it.

How has your practice evolved over time?

This is a really big question, because as I’ve said, my life and practice are so deeply interwoven.
I’m sure you don’t want to hear my whole life story! I’ve been learning photography most of life  but my
earlier career path was as an academic in comparative literature. My work is always influenced by my passion for literary theory, semiotics, storytelling and languages (I read grammar books for fun). The intensity of the learning ebbs and flows. The past four years working on “The Tree Planters,” “The Enchanted Forest” and my film, Forest for the Trees has been a culmination of decades of acquiring skills and ways of seeing and working. Before that, my last big project was writing my book and making images for Looking for Marshall McLuhan in Afghanistan, an intense merging of theory and practice, of combining words and images. In the 90s, I lived and worked in Cambodia and worked alongside great photojournalists. In New York in the 2000s I was exposed to a huge visual vocabulary of contemporary photography. I’ve worked in Iraq, Afghanistan, Lebanon, Israel, Palestine, Myanmar, Thailand, the United States and came out with photographs that no one would call photojournalism, but that looked at subjects that were in the realm of political events and conflict. I’ve had to fight the label “photojournalist”—I am not a photojournalist by even the loosest definition of the term—which sets up expectations and is a problematic word in the art world. It's made me think a great deal about labels and genre in photography. The best  photojournalists are also great visual artists. I even created a course at the University of Toronto called “The Art and Purpose of Photojournalism and Documentary Photography,” so that I could open up these debates around genre. I accepted that teaching position to give myself time to transition permanently into the art world (I was previously always too busy and never in one place long enough to commit). I left my New York editorial photography agency at the same time, in 2010, and by 2015 had joined the Stephen Bulger Gallery. That was and is still a dream come true.

At Art Toronto 2019 I will be bringing together four portraits from my 2016 to 2017 series The Tree Planters (which premiered at the Stephen Bulger Gallery in October 2017) with three never-before-seen works from my new, corresponding series The Enchanted Forest, made in 2018 and 2019, at Art Toronto.

The large-scale artworks range from 78” x 54” to 40” x 27” in size. The magnitude of the photographs emphasizes the unimaginably harsh landscape and the heroism and fortitude of the tree planters as they labour through uneven and overgrown debris-strewn terrain while carrying 30-kilo bags of seedlings, equipped with only a shovel. Professional tree planting, a backbreaking job that combines the high intensity physicality of sports with the urgent productivity of piece-work industrial labour, is represented in meticulous and exacting detail.

Every portrait is an action shot, taken in real time. I work in tandem with my athletic lighting assistant as we both run, backwards, in anticipation of the movements of these fast-paced, erratic subjects. When every element comes together, this extreme process results in classical lighting and exact compositions unprecedented in this type of context. With their magical, painting-like sense of artifice, I intend for the photographs to remind the viewer of masters like Eugène Delacroix, Jean-Auguste-Dominique Ingres, and Caravaggio.

My new series, The Enchanted Forest, complements The Tree Planters by looking beyond the edges of the clear-cuts, inside the tree line where unfelled trees remain. The Enchanted Forest’s fairy tale-like representations of forest scenes, like The Tree Planters, are rendered large-scale and in impeccable detail. Through preternatural imagery, they iterate the figure-ground relationship of tree planting and reforestation to deforestation, to new growth forests as well as forests ravaged by fire or insect infestation.

What do you want people to take away from your work?

This project is a love letter to millennials and to the future for young people. It is about the value and dignity of physical labour, the precariousness of the environment, the climate crisis, and the unsustainability of current forestry practices. I want people to see tree planters and the forest in ways they never have before. 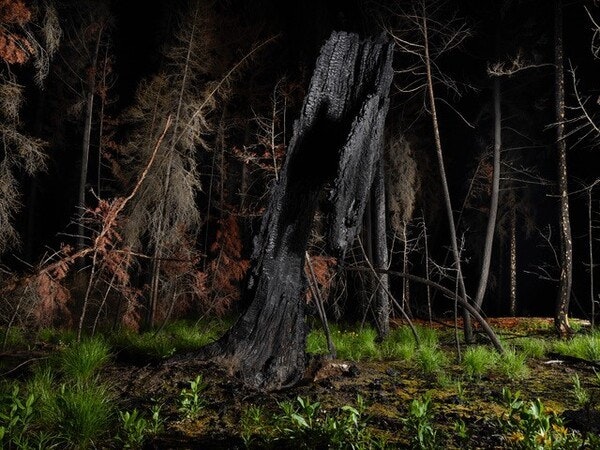