I currently work in Brussels, Belgium. My workspace is located on the edge of the city in the now abandoned American pavilion from Expo ’58.  It is in the middle of a large park with a very ominous view of Atomium, a giant model of a unit cell of an iron crystal built by Belgium for the world fair.

My building was repurposed firstly as a theatre, then offices, now run by anti-squat and rented to artists who occupy the space indefinitely until a new plan is developed. The building is uniquely circular with a large open air space in the centre with a wild garden in the middle of where the studios circle around. This central area was once an extravagant fountain, now dismantled and overgrown- a bizarre reminder of what the architecture was once symbolically built around. My space is shared with another artist and is 400/m2

How would you describe your practice?

My work as a painter has entailed a search for strategies that complicate and disrupt the lineage of historically accepted painterly gestures. I intentionally occupy a performative position, creating works where meaning must come from the materiality of the painting itself, rather than relying on typically conventional language used to describe it.

Much of the work on view comes from an ongoing series using Belgian art deco vases as startin points for paintings. Upon initial viewing, these paintings present a still life convention as visual signifier. In closer viewing, this convention dissolves as subject, and the vase’s material construction to express more complex visual tensions takes over. Each vase is “crafted,” wherein a collage technique of discarded acrylic paint flecks are used to meticulously construct forms, piece by piece. This process is used as allusion to construction inherent to ceramics, where each vase has a physical presence on the painting’s surface, rather than an illusory one.

But more importantly, I approach these paintings as self-portraits wherein an eccentric expression emerges in the process of painting that overtakes the vase, an overgrowth of paint application based on my mood and visual response to what I am looking at. 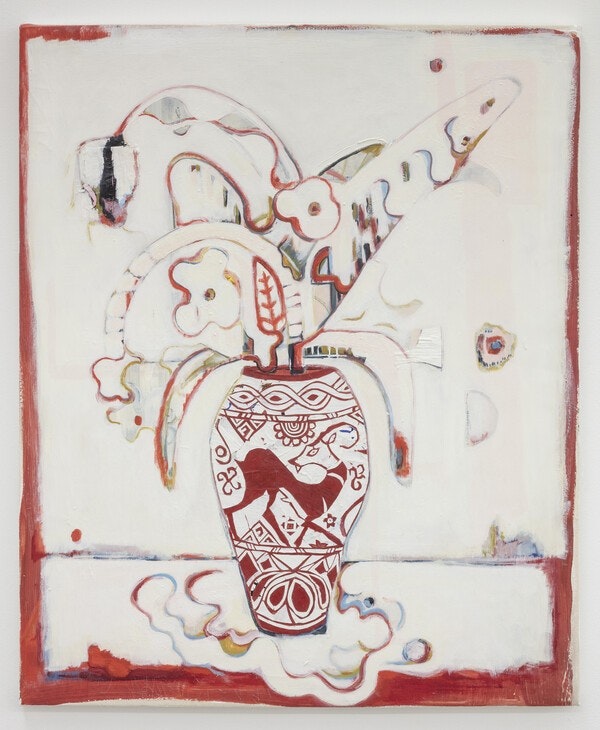